In 2018, Rep. Ilhan Omar made history as the first Somali-American and one of the first two Muslim women in history to be elected to serve in Congress. In her two terms in office, she has established herself as a key member of the Congressional Progressive Caucus, fighting to tackle the climate crisis, expand Medicare, invest in affordable housing, fix our broken immigration system, defend democracy, and cancel student debt. As the whip for the Congressional Progressive Caucus, we’ve seen Rep. Omar build a powerful progressive voting bloc and prevent harmful compromises on an inclusive recovery.

We know with Rep. Omar in Congress, the people of Minnesota’s 5th district will always have a progressive ally fighting for them, not for big businesses, banks or billionaires. That’s why we’re proud to endorse Rep. Omar, because Congress needs a powerful and courageous voice like hers.

Civil Disabilities nominated Rep. Ilhan Omar for a national endorsement. If you would like to join the group or get involved, you can find them on Instagram. 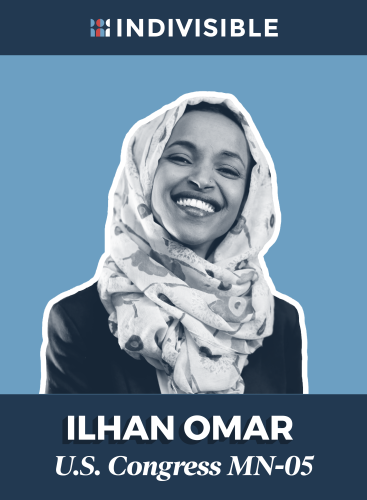